The Skeptics' Guide to the Universe, The Skeptic Zone

The day started with our skeptical cat apparently wishing to write a blog entry.  After some discussion, he was convinced there was only room for one blogger in this house, but he allowed me to post today anyway. 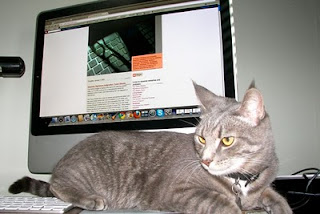 For the second week in a row the Skeptics' Guide to the Universe was delayed on the website and iTunes by technical troubles, so I listened to the show on a twitter link provided by your host Dr. Steven Novella in front of my Mac.  Luckily it was worth it as SGU did their round up of their predictions about the preceding and coming year.  Rebecca won the prize for most correct prediction for 2009 by predicting the death of pop star and cultural icon Michael Jackson.  All the other rogues' predictiona were just plain off unless you twisted them while squinting your eyes.  Rebecca predicted that alleged psychic and religious leader Sylvia Brown would meet her end this year, so we shall see.  If this is correct, Watson just might be known as the angel of doom.

On  a more personal note, I am unhappy how Sylvia Brown's prediction of a five minute head cold "cure closet" has not come to pass in doctor's offices in 2009.  I have a heck of a head cold, and it sure would be nice if that were true.  Heck, I live three minutes from the world famous, in Pennsylvania*, Hershey Medical Center, they do not even have a clinical trial going.

The most interesting part of the show was the interview with the new President of the James Randi Educational Foundation, D.J. Grothe.  While Grothe could not say for certain he did think it likely that he would no longer being hosting Point of Inquiry for CFI, but instead had plans for a new JREF produced show For Good Reason.  FGR sounds as if it will be as to POI with Grothe's "convivial fisticuffs" as The Tonight Show on NBC is to the Late Show with David Letterman on CBS.

What struck me was just how "corporate" Grothe moving from CFI to the JREF must have been.  Grothe referenced having to get special dispensation for leaving CFI board from to take a position at the JREF due to noncompete clauses, and contractual obligations, etc. It echoed the same discussions I read about when an executive from General Motors hops over to VW, but apparently the world of non-profits is dog eat dog too.  He also indicated how it would reflect poorly upon CFI to have the head of another organization hosting their interview show.  I am just a naive bugger when it comes to such things.

I suspect Grothe is going to have a greater impact on the JREF than Phil Plait for a number of reasons.  The first is that I suspect that Grothe is a bit more organized than Plait in just how he talks about his future plans and ambitions for the JREF.  I also suspect that a bit more of the humanism and promoting of a secular world view will percolate into the JREF.  I believe Grothe when he says the JREF mission to promote 'classic' skepticism of UFOs, ghost, and big foot will continue unchanged, but Grothe also indicated that he whole-heartedly endorses the CFI's all encompassing skeptical world view.  His own thoughts and value surely will have some impact on the JREF.

Grothe wants to increase the number of regional conferences, push more education matters with the JREF in the classroom, and he has an impending announcement with the million dollar challenge.  The challenge will not be going away, but somehow used to increase the exposure of the JREF.  It sounds interesting to say the least.  On the one hand, I could see a younger, focused hand really doing great things with the JREF, keeping it small and nimble and really sticking it to the practitioners of woo, or the JREF turning into a competing CFI or mirror CFI where it turns into a big institution unto itself.  I cannot wait to hear Grothe's new show, or see who CFI gets to replace him on Point of Inquiry.

Sweet Loretta Marron thought she was loner but she was a jelly bean. (apologies to Sir Paul)

The Skeptic Zone featured a lecture from approximately 2005 from Loretta Marron "The Jelly Bean Lady" to the Australian Skeptics.  She is a crusader against pseudo scientific medical practices, and has a engaging story of her own effort in combating breast cancer.  From what I could gather "the jelly bean" part of her persona has to do with jelly beans doing as much good as a placebo and less harm than than CAM therapies by treating disorders with the delicious jelly candies with a hard shell. (On a personal note:  the lemon variety are the most effective.)  I agree with the content of her talk on how one person can make a difference in writing to magazines and questioning them on running ads for dubious medical products or health supplements.  The talk as a whole was a bit disjointed.  I am not sure this was due to not being able to see the visual references she was making, or if it was her off the cuff delivery.  This might be a podcast to listen to in the quiet solitude of one's chambers in their home, rather than while driving.

The show had another segment of Saunders and Dr. Dunlop recounting a visit to a pharmacy in  suburban Sydney.  On the positive side, a pharmacy actually did not carry homeopathic preparations, which is good.  On the other hand, the staff at the pharmacy did not even know what a placebo was, let alone the alleged mechanism for how homeopathy works.  I think that is just the way homeopathy prefers it, since if they advertised we're just giving you water, a sugar pill, or a wax to treat you, few would likely be willing to try it.

Then we were treated to a interview of research scientist Sheena McGowan by Dr. Dunlop on the latest treatments to prevent malaria, and at least as interesting how science has become so exquisitely complex that it takes multiple specialists in multiple labs across continents to work on new vaccines or other medical treatments.  As always, I thoroughly enjoyed Dr. Dunlop interviewing a real scientist doing real work, and just how clever scientists must be to continually improve and find new treatments.

All in all, both the SGU and the Zone were as always well worth the listen.  Now it is time for me to drive over to the Milton S. Hershey Medical Center and demand to see the cold treatment box that Sylvia Brown predicted would exist at this time.


*I would to thank Mel Brooks for this joke, and for those of you not in Pennsylvania, has anyone heard of the Penn State-Milton S. Hershey Medical Center, Children's Hospital, Medical School, and School of Nursing?  Around here everyone acts as if HMC is Johns Hopkins in Baltimore or Allgemeines Krankenhaus in Vienna, but I find this doubtful.
Posted by Howard "Nigel St. Whitehall" at 6:08 PM

Labels: Jelly Beans, To be or not to be