This week on Righteous Indignation, the Indignates carried on without Tristan who was off doing other things.  Regardless, they carried on to provide another entertaining and informative show from the mother country.

The Indignates covered a story provided by none other than the Conspiracy Skeptic's own (and transatlantic gentleman caller of Hayley), Karl Mamer, on a story that a nail that was possibly used to crucify Jesus was found in a box kept by the Knights Templar.  Alas, it was lost when the government took it away from Indy to be studied by top men. Top men.  Actually, it was just a nail that happened to date to the two centuries around Jesus's life and seemed to be kept as a relic.  As Schofield pointed out, this is the same as finding a sock from the 1960's and saying it was possibly President John F. Kennedy's foot cover.

Gavin covered a story that studied Sylvia Brown's true "hit" rate, which she claims to be 85%, and based upon a study of her appearances on the now defunct Montel Williams Show, it was actually zero percent.  She was either dead wrong or too vague to be verified.

Then Hayley made a plea for the listeners to vote for her dog Lucky, who is a rescue dog, on the cutest Mutt award being run by PETA.  Yes, that PETA, People for the Ethical Treatment of Animals.  The Indignates discussed how PETA is being a bit hypocritical since on the one hand they are running a contest on who has the cutest pet, but on the other hand are opposed to pet ownership as the pet is "the man's" slave.  After much discussion, all decided that the plan is to get Lucky to win so his slavemaster, er-r-r, owner can get some publicity and "bitch" about PETA.  I am not a fan of PETA, and I will allow Hayley to win this award without complaint since obviously this is for the cutest mutt in England, while I have the cutest mutt at least in Pennsylvania. 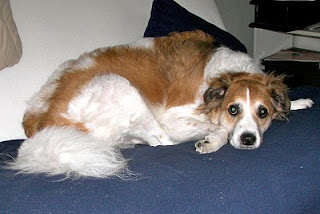 The Indignates covered a story, which was also covered by the SGU and on the Skepchick blog, of a woman whose group called Canine Health Concern says that big-Vet is giving our faithful slaves too many vaccines causing puppy autism.  Now, this is total bunk.  First, there is no evidence vaccines cause any troubles such as this in people let alone Fido, and second, autism has not been diagnosed as dog or other animal disease.  The group also claims it might be in rabbits and cats.  Now that I think of it, my cat might be autistic, and I, gasp, always get my critters their vaccines.  He rarely comes when called.  He does not sit on your lap when you bring him over, but will drop in your lap when not desired.  He has an odd antisocial desire to head-butt me awake at 4 a.m. to be petted.  I suddenly have concerns. 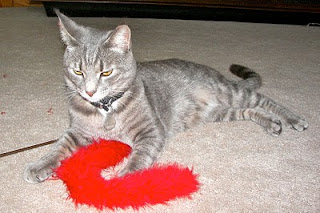 This obviously is an excuse for equal time.


The guest interviewed was Psychologist Daniela Rudloff, who discussed the shortcuts our brains take to save time and energy.  She discussed pareidolia, and other optical illusions of ingrained methods for our brain to quickly perform a necessary task, but while these effects have benefits they have drawbacks.  After all Jesus' likeness really isn't on a grilled cheese sandwich.  She discussed how group think can drive people to extremes to fit in with their peers.  She discussed how skeptics seem to fall particularly prey.  It makes sense, I do sometimes even in my internet only connection with other skeptics see an echo chamber effect occur.  She also discussed how it is difficult for people to escape a belief system even when it is falling apart around them, and actually can drive a member closer into the group.  She used as an example UFO doomsday groups that when the big doom day comes and goes without the end of the world, instead of breaking the members apart drives them into a tighter bond.


Chris Mooney interviewed Andrew Revkin who until recently was The New York Times science writer, and the lead in the media in reporting of President George W. Bush's bending of scientific reports to suit alleged political needs.  Probably more famous as the target of conservative commentator and popular political talkshow host Rush Limbaugh who questioned if Revkin should kill himself for the sake of the environment and population control.  (Limbaugh later backed off, but never rescinded his comments.) Mooney and Revkin discussed the future of science journalism and how it can best survive in an ever fragmenting media and information environment.  Mooney's style seems to lean on questions provided by forum members.  I always have mixed feelings about these type of questions.  On the one hand, I am all for giving the listener a greater hand in the dialogue.  Yet, is it a phoney dialogue?  I suspect some of the same questions would be asked without them originating from the forum.  Although to be fair, I did suspect Mooney would not have asked all of them.  Perhaps I am more cynic than skeptic in this regard.

Revkin has left journalism for academia and is now at Pace University, and plays with his band Uncle Wade.  Revkin defended this change by noting that with the drop in paper circulation, the increase in the consumer picking the media outlet that fits a pre-conceived world view (conservatives watching Fox News and liberals watching MSNBC), being a science journalist is increasingly having diminishing returns for the effort.  I see his point, but I also get the feeling the man is a bit burned out.  He also discussed how people, across all cultures, just do not grasp impending natural and manmade disasters, and make little to no plans for their eventuality.  He gave as an example that the Pacific Northwest is due for a whooper of Earthquake that will likely collapse hundreds of school buildings, but no effort is made to retrofit any of them not to be death traps.  This was a sobering thought.

Mooney continues to form his own style to imprint upon POI, and the Revkin interview was interesting but ultimately depressing. 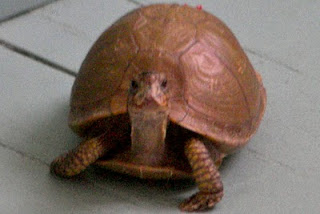 I have no reason to show a picture of my slave turtle of 19 years, but I might as well show all of my critters.  (We have a two year old goldfish we won at the local fair too.)
Posted by Howard "Nigel St. Whitehall" at 9:52 PM