The Skeptics' Guide to the Universe, Point of Inquiry, For Good Reason, The Skeptic Zone 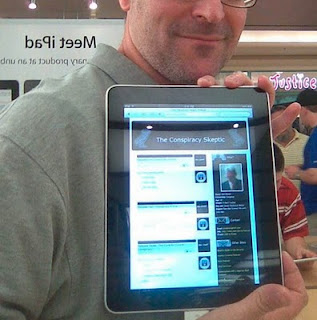 Now if I can only convince my wife to be less skeptical . . .

Edit: Jeez.  I forgot that this was the 200th Skeptoid episode with Brian Dunning.  Dunning gave a brief behind the scenes how he investigates and records each episode.  He then requested that loyal listeners donate, donate, donate.  The episode clocks in around 13 minutes, and is worth the listen.  I do have to say I am surprise he uses plan old Garage Band to record the shows.  I thought he'd use something more complex.  It must be the microphone set up.  The guy is dedicated. (It was a long weekend.  This should be above the iPad photo.)
Posted by Howard "Nigel St. Whitehall" at 9:36 PM