Token Skeptic, Token Skeptic
Kylie Sturgess has decided to put out a weekly podcast Token Skeptic, which is quickly becoming a favorite at SkepReview.  Funny thing is Sturgess has apparently decided that instead of putting out a podcast each week, instead she'll put them all out at once and the listener can just listen to them one a week.  It's very DVR of her.
No.  I kid.  Sturgess has put out two episodes in two days, and word on the street is that a third is due out any moment.
First, the Token Skeptic has a new logo.  The sexually suggestive female person/feline hybrid, which is against god's will, playing with tarot cards is out* and this is in: 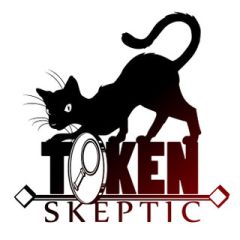 
edit: *old logo, as revealed in the comments, it is still for viewing pleasure at podblack.com