Interview with Blake Smith of the Monster Talk podcast

Blake Smith is everywhere these days. Some know him by his moniker Dr. Atlantis. Others know him by his actual real name, Blake (aka Blake Smith, aka Mr. Smith). And by he's everywhere I mean three of the five places I really actually pay attention to: the Monster Talk podcast (which he's a host/creator of), the Amateur Scientist podcast (where he does some occasional bits for Brian Thompson), and SGU's message board (where he claims to be 943 years old and macks the ladies wearing a dive belt and a lab coat). The other two places I pay attention to are, of course, Skeptical Review (kinda, like, the blog you're reading now) and LeggyKoreanWomen.com. I can't do much about making Blake into a leggy Korean woman, but I can bring him into the Skeptical Review fold by interviewing him.

I grabbed a red eye to Atlanta, GA (a city Brian Thompson, hipster king of Skepticism, waggishly calls "Hotlanta", ostensibly because of its muggy ass temperatures) on Friday and met Blake Smith for Saturday lunch at a Five Guys Famous burger shop just off of the Interstate 575 (Phillip Landrum Memorial Highway). Over too many cheeseburgers to recount, Cajun fries, and handfuls of bulk peanuts, we talked about his show and what I could do about perspiration. 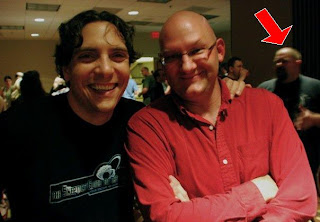 Is your podcast a skeptical counter balance to the TV show Monster Quest? What was the impetus to do a podcast about monsters?

That's a common assumption. It wasn't just MonsterQuest that inspired me. I was tossing the idea around in my head for a while before finally deciding to execute. My original idea was to have a show called "The Doctor Atlantis Show" and to use it to respond to various poorly executed (from a rational perspective) television shows. But I have a propensity for snark and sarcasm that might not be the best way to approach those topics. So I finally decided that a science show about monsters would be better. I'm mostly inspired by CBC's Quirks and Quarks, which often interviews working scientists. That show and SETI's Are We Alone? are probably my two favorite radio-show/podcasts. That's not fair to "real" amateur podcasts as both of those shows are slickly produced, but they were my main inspiration. And the other show that really inspired me was Mysterious Universe. I figured if Ben Grundy could do something so well put together yet credulous that I could do something similar. Of course the audio quality of MonsterTalk is only recently starting to live up to those models. That was work on all three host's part, and not cheap. But the show's past few episodes really sound much better. So, hooray for decent microphones and closed windows!

You have two other co-hosts on Monster Talk. Who are they? Why does one of them sound kind of funny?

My two co-hosts are Dr. Karen Stollznow, a well known Australian skeptic and blogger and Ben Radford, a journalist and managing editor of Skeptical Inquirer magazine. I met both of them at Dragon*Con and struck up friendships that have lasted and flourished despite our all being in different time-zones. I think Ben probably sounds funny because he is from New Mexico. Many people assume that English is his first language, but actually he usually speaks in Esperanto and we're constantly having to remind him to revert back to English. That's what you meant, right?

Laying all modesty aside, why is your podcast so freaking awesome?

We get to talk with scientific experts about monsters - which is fun for us, often novel for the interviewees, and I get the questions I would want to ask answered. That other people also want to know the same answers or hear the same questions posed is just icing and rainbow sprinkles on the cake. 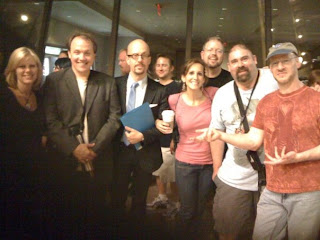 Why does your podcast only seem to come out once a month?

Because of a TARDIS accident I'm living on 1/4 time. For me the podcasts come out weekly.

But seriously, the answer is that I have a job, a ton of hobbies (including paranormal investigation), 3 kids and a wife and all of those other things tend to take precedent. Also, it's a beeyatch to coordinate 3 hosts across 3 time-zones plus an interviewee. Our real schedule is supposed to be bi-weekly, and that's what we shoot for. If I were single and childless I'd probably get the podcast out quicker - but I'd also be naked all the time.

You've mentioned you sometimes dialog with the producers of Monster Quest. Any luck in getting them to adjust the way they approach their show?

They wouldn't listen to my appeals and I had to cancel their show.

I learn more science on your podcast than SGU and Amateur Scientist combined. Why is that?

If I lived up to my own wishes, our show would effectively be NOVA with monsters. I don't think SGU or AmSci are really shooting for that level of pedantry. I want our show to elucidate, enervate and repudiate. I want to elucidate the science behind the lore of monsters. I want to enervate listeners to get excited by real science. And I want to repudiate false claims when we can identify them.

Some people have asked me if it is okay if they masticate while they listen to our show. Well I know I do, so why not them? 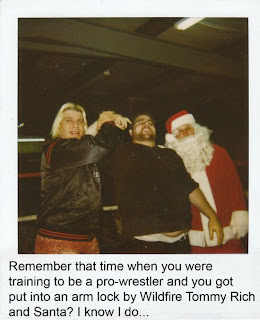 One thing I like about your podcast is you get some pretty hardcore scientists, not the professional skeptics doing the podcast circuit. Have you had any challenges trying to get some of these serious researcher types on your show?"

Yes. We had a dickens of a time getting Dr. David Martill on to talk about pterosaurs. I won't get into all the details but I did have to write a detailed letter explaining (or endeavoring to prove) that I'm not "some nutjob." Thankfully he came on and it was an absolutely fascinating discussion.

We've also had a hard time getting "believers" to come on the show. So far only Jimmy Chilcutt, the man who says there may be bigfoot fingerprints in some tracks, has come on. And even he won't say he believes, only that he thinks his evidence strongly implies there is a mystery ape in North America making tracks.

We've tried to get BFRO creator Matt Moneymaker to come on, but thus far he has not felt the need to do so. Loren Coleman has not come on yet, though since he says we're "a stalking horse" for CSICOP
Posted by Puffin Watch at 12:45 PM