There are a lot of people at TAM. At the 6 pm meet & greet reception, JREF head honcho DJ Grothe announced attendance was topping 1,300 people.

This is my first TAM so I have no basis for comparison. I'm also not much of a conference go'er so I'm not even sure how TAM stacks up against DragonCon or more prosaic conferences database administrators, biochemists, and paper salesmen go to.

I got to the South Point Casino (the TAM venue) at 8:30 am. I checked in, breathed a sigh of relief my minimal hotel room had a in-room safe and exhaled a sigh of dis-relief that the safe wasn't functioning. A call down the maintenance had them come up within a few minutes of the call and they got it fixed up. It was a dead battery. With passport, American funds, my Canadian cash for my taxi ride home, and my netbook securely squared away in the room safe, I proceeded to registration. 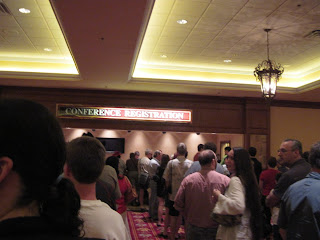 Lines were pretty long, despite it being Thursday at 9 am. Skeptics don't strike me as morning people but then everyone is pretty hyped and I'd imagine for many Wednesday night before TAM is like the night before Christmas. The lines moved pretty quickly for the pre-registered. After collecting my badge, program, and ticket for my one optional workshop (Science Based Medicine 1), I proceeded to the free tshirt table. S, M, L, XL, and XXL were on offer. I took a XL. I think that's really a size too big but I like my tshirts to be baggy. I later befriended one of the volunteers handing out tshirts and he noted they were still pretty lousy with smalls. TAMsters also got a free 2gb thumbdrive. Sweet.

My Science Based Medicine workshop was at 12:30 pm but I horned my way into Michael Goudeau's juggling class. I develop Michael's web site for him. Michael has been on a push to get more corporate work (is your company coming to Vegas? Hire Goudeau). Like HP comes to Vegas, Michael does juggling at their keynote or works their dealer booth. I thought I'd capture some video and photos of Michael teaching the TAM class and then put it up on his site's corporate page as a kind of hint that Michael can handle large groups. Believe it or not, 250 people signed up to learn to juggle with Michael. Michael was quite surprised by the numbers. Michael is simply the nicest, most humble man I know. I don't think he grasps fully how many people he touched during his Penn Radio days and is convinced only about 4 people still remember him. Clearly 250 people paying $40 to learn to juggle is pretty good evidence Michael is and remains a popular figure in skepticism. 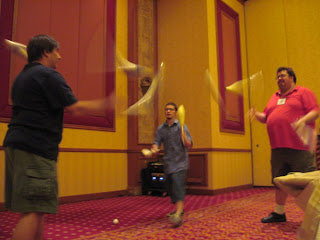 Michael and I did the math a couple weeks ago when he got the 250 figure. 120 minute class, 250 people. That means he has exactly 2 minutes to teach each person to juggle. Hmmm. Michael got some juggler friends to help out. They not only worked their asses off but gave the attendees lots of laugh. Stand out was Jacob Jax. Jacob is 20, a drama student at the University of Las Vegas, and a magician to boot. Despite his age, Jacob can more than hold his own in juggling and he demonstrated a quick wit. Keep an eye on this Jax guy. He's going to be big stuff. The high point of the class came at the end with Michael, Jacob, and another helper demonstrated some complex passing routines. 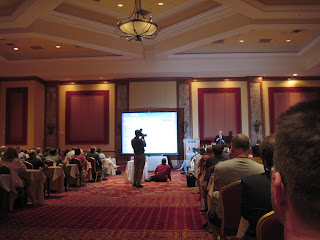 After helping Michael and Jacob clean up, I went to the Science Based Medicine workshop. Pro tip: get to these things early, especially at a TAM with record attendance. I got stuck in the back. Makes for LOUSY photo ops. The SBM workshop had Dr. Novella and Harriet Hall, another favorite of mine. Their talks were 101 stuff for non-doctor types. Basically how do you recognize bad medical information on the Internet and how do you recognize good web sites. 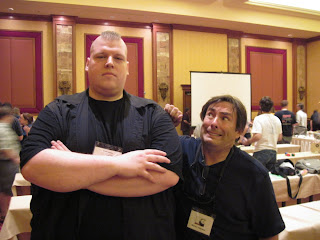 I hooked up with Frank, otherwise known to Penn Radio fans as Big Frankie. Frank was a regular caller who was spending a year not working. His mother was paying him to spend all day on a treadmill to reduce his size. Frank has proven to be an utterly hilarious guy. "I like coming to these conferences and speaking with scientists but I get the feeling many of them were nerds in high school and picked on by guys who looked exactly like me. They're a little shy around me." Frank confesses he was not the bully in school but a brother nerd, he was a member of the chess team. He did also act as something of an "enforcer" in his high school chess team, ensuring no one fucked with the other members.

After the conference I chilled out with Frank, Jacob, the tshirt volunteer. At some point Richard Dawkins walked into the conference area. We were all kind of "ummm ummm" and at a total loss for words when we all pivoted to say hello to him. "Remember that ummm evolutions stuff and ummmm I'm a big fan of it. And stuff."

TAM is about being very tongue tied your first day as you meet all your skeptic celebs. 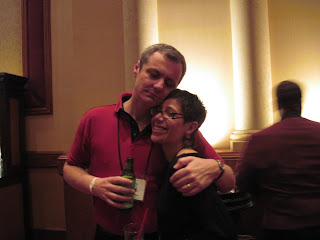 At 6 pm was the kick off reception. 1300 people barely fit into the South Point's Grand Ballroom and the beer and food lines were long. Real long. I met Skeptically Speaking host Desiree Schell. Richard Saunders snatched her from me and I didn't see her for the rest of the night. I met up with a Toronto friend. He's a magician who goes by the name of Zoltan the Adequate. We grabbed a beer, sat with a couple random TAM strangers. Zoltan, better known to me as Andy, really broke the ice with our table pals doing close up card magic. It was utterly stunning what he could do. 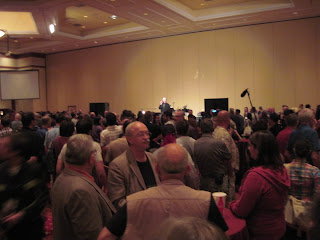 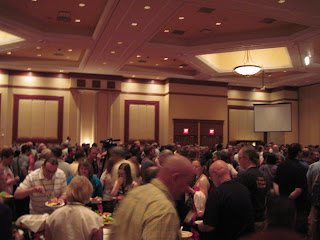 After that, still being on EST, we broke up the party at 9 pm and retired.