TAM proper kicked off Friday with a continental breakfast and then a live taping of Skeptics' Guide to the Universe. I thought the breakfast started at 7 am but it turned out to be 7:30 am. It was fortuitous that I arrived early. I found Rich Orman of Dogma Free America fame. He gave me the skinny. Get your seat first in the grand ballroom where most of the action happens. Then go out into the conference hall where they've laid out a table of fruit and carbs. The breakfast was not horrible. But then any food that's "free" (it's part of your registration fee) and you don't have to cook for yourself I fully appreciate. 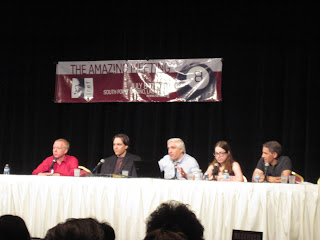 I sat about six rows back for the live taping of SGU. You kind of munch on your food in your seat as you await the start of the SGU taping. The schedule indicated there were two live tapings, one Friday morning and one Saturday morning. At first I assumed they'd be doing two shows but after Friday's taping ended without Science or Fiction, I realized they tape the show over two days and then make one show out of it.

After the taping the kick off speakers was supposed to be the highly engaging Massimo Pigliucci but there seemed to be some small change and Michael Shermer filled in the slot. Shermer talked about how we're wired generally not to be skeptics. We're wired to make Type 1 (seeing a tiger in the shadows when they're not there) and Type 2 errors (not seeing patterns that might be there) when they're to our survival benefit.

I kind of blew off the next series of speakers and schmoozed in the hall until the provided lunch. It wasn't too bad. Steak, chicken, salmon, and your choice of cake or pie.

After lunch Simon Singh took the stage and talked about his recent case with the chiropractors. Singh is pretty engaging (as I type this I'm sitting right behind him and he's engaging my seat mate in an interesting and gentile conversation that's making it hard to complete this post).

After Singh was Joe Nickell. Nickell is a workhorse in the field of skepticism. Nickell gave an interesting talk about how he went undercover to investigate psychics and faith healers. Nickell previously worked as a detective and used some of his trade craft in these investigations. 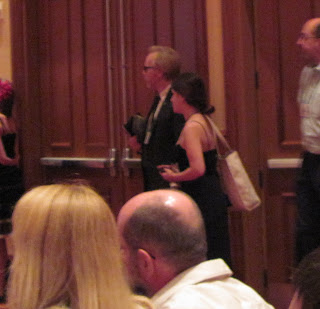 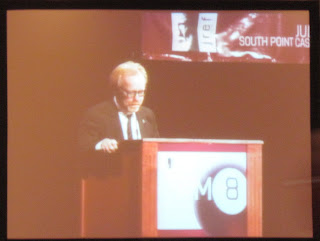 Adam Savage, always the crowd favorite, took the stage. Savage mostly talked about atheism but he left half his allotted time to take questions from the floor. I started to notice this young guy, if he claimed to be 16 I'd have no reason to doubt him, frantically trying to get in a question. He was dressed up in a suit too sophisticated for his young age. He also had a high def video camera. Eventually Hal Bidlack got around to fielding his question. The young fella started to film Adam in preparation of his answer and then went into a confusing, rambling question accusing Savage of dishonesty over their moon landing hoax. It appeared to have something to do with how they tried to debunk the claim astronauts simulated moon gravity using cables and pulleys. The young dork claims they used a method not claimed by the moon hoax believers. Savage suggested to the young dork he seriously needed to chill out a bit. And then noted the method they used was indeed one of two methods claimed by various moon hoaxers and they only had time for one and went with that. Other questions were fielded but clearly the young dork had more "gotcha" questions and kept raising his hand. He then took to packing around in a hyper frustrated manner. Bidlack informed him he was only accepting one question per attendee so, sorry. 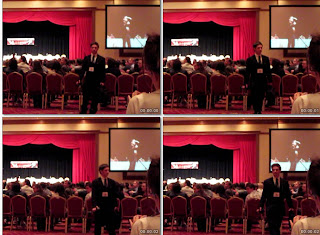 After Savage was Pamela Gay. Gay spoke a bit about the recent kerfuffle about her being a Christian and can skeptics be both skeptics and god believers. I popped out for a bit to get coffee and noticed the young dork pacing around the hall looking for Savage. Eventually some attendees sat him down and talked him off the ledge. Maybe.


After Gay, Phil Plait was up and the young dork took his place waiting for the Q/A. Plait didn't really talk about astronomy but kind of lectured about how skeptics need to be nicer to woo-ists. He did make a good point that you should ask yourself if you've ever changed your opinion about something because someone called you a complete brain dead moron.

The Q/A portion came and Bidlack announced time was tight and there would only be time for one question and Bidlack was going to ask it. Oh the burn, young dork! Young Dork followed Plait out into the hall but Plait is pretty much surrounded by fan boys and I don't think Young Dork ever got to ask his question.

Talking to some attendees who spoke to young dork, it was the opinion the kid wasn't fully right in the head, possibly suffering from Asperger's.

After Plait I took some me time and lounged around the hotel pool. I wanted to do a work out in the hotel gym but gym access wasn't part of your room rate. I didn't want to pay $15 for a quick 30 minute work out.

I popped back for the closing of the conference. I found Rich Orman and he invited me out with this posse to an off-site buffet. I wasn't fully hungry but it was nice to bond with Orman and his high calibre gang of skeptics. One guy was a Google developer. I worked for a web portal in Seattle 10 years ago so it was nice to chat about the pre-Google days.

Me trying to present Shermer with my manifesto that will solve all the world's problems and let you walk away from your mortgage. Oddly, the bastard is ignoring me. 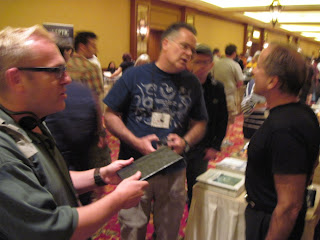 I tried to do the Asian heart thing with my hands with Rebecca Watson but I think I only manage to do a spider shadow puppet: 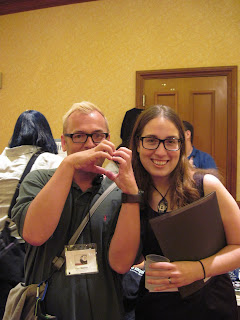 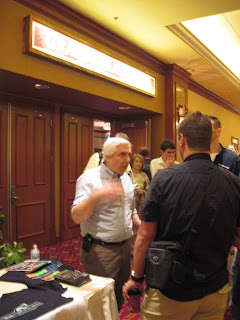 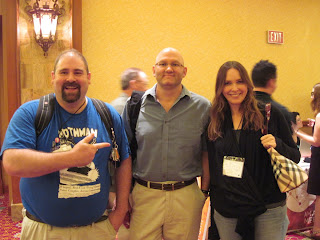 Zoltan the Adequate and Rebecca: 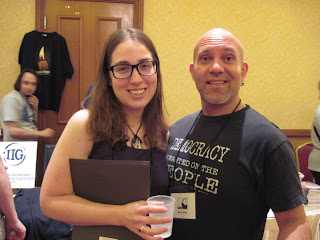 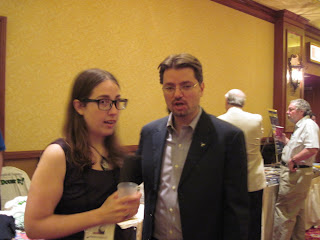 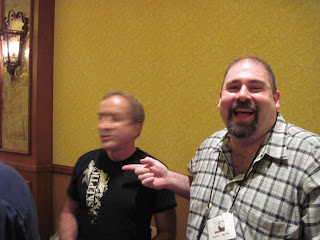 Me being scared witless by the Monster Talk peeps: 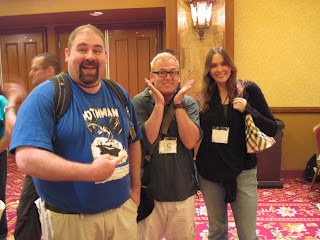