I killed three birds with one stone by attending TAM 8. I've never been to Vegas before, I've been keen to meet Michael Goudeau (I'm his web master for his hire a Las Vegas juggler site), and of course I wanted to check out TAM 8.

There was some grousing about this TAM not being live streamed like TAM 7. In one way that was a shame because it was the live streaming that really motivated me to attend TAM 8. There seemed to be a lot of fun and energy. TAM 8 attendance was up 30% (in a down turn that doesn't look like it's going to be over anytime this decade) and I'd like to think the live streaming had something to do with that. On the flip side, the wireless charges at the South Point Casino were pretty costly. And maybe the streaming affected the DVD sales.

There always seems to be grousing too about the cost. 4 days of TAM costs about $450. $125 a day. That works out to be about $11 an hour (assuming you're TAMing it up 12 hours a day). Many have pointed out $450 is a bargain compared to various professional conferences. One also has to consider what price you'd pay to have minute by minute opportunities to sit down with the likes of Massimo Pigliucci or Evan Bernstein and have a convo over a beer. What would you pay to share a joke with Phil Plait? Also, one has to work in the food you get for your fee. No matter where you go, food can be costly. Now, the food at the South Point isn't great, but there's a lot, and it helps defray some of the costs. Eliminate two meals a day in Vegas and you're saving $40 a day. One also has to consider hotel costs. Try to get a room rate at a conference class hotel in Toronto or New York for $60 a night. Some people have noted Dragon Con is cheaper but then hotels super jack up the price for Dragon Con. Vegas probably hosts half a dozen major conferences a day and the rates don't blink. And then there's airport transportation. Hotels in Vegas are close to the airport and most offer some kind of free shuttle. You're probably saving $100 on taxi transit to and from the airport. Finally, Vegas airfare is cheap.

All 'n' all, if you want to attend the preeminent skeptical conference in the world, you won't be able to do it cheaper than in Vegas, I think.

What about the hotel itself? The South Point won't rank on anyone's radar as a high class Vegas resort, that's for sure. The on premise food is cheap. That's a bonus. I loved their 75 cent hot dogs. The South Point is pretty remote from the main strip. You won't get the feeling like you're in Vegas (if you ignore the slot machines between your hotel room and the conference hall and the waitresses all dressed in push-up corsets and black thong panties over black tights). But that ultimately works to its advantage. You're not lured away by the lights and delights of Vegas and you're forced to spend time hunting up fellow TAMers to talk to. It would have been nice if gym access was part of your room fee. You eat a lot, drink more, and you're pretty sedentary. It would be nice to skip out of a talk, go for a run on the treadmill, stretch some muscles on the weight machines. The seating in the halls is mighty mighty uncomfortable. It would be nice if the main programs were held in some kind of theater style room with more comfy seats. Sitting at a banquet table type chair organized lecture style is painful after an hour. I took to avoiding the chairs and just planting myself along a wall. I could stretch out my legs and the wall provided more back support.

If you're not wired via a 3G connection and an iPhone or Blackberry, you can miss out on a lot of buzz. Many TAMers regularly tweet their locations and near term plans. Without access to Tweet-space, you're kind of left to word of mouth to figure out what kind of social events are planned. Having to run back to your hotel room, fire up your netbook, and figure out what cool parties and trips are going on can be a pain.

TAM was crowded. It took me about half the conference to adjust to the crush. It would have been more enjoyable if the morning breakfasts were hosted in some kind of restaurant type setting, instead of something you had to grab quickly and eat in your chair while you waited for the SGU taping. The opening night reception was overly packed with people. It was hard to get a drink, get food, and move around.

Me and 300 other people waiting to gain entry to the hall for breakfast: 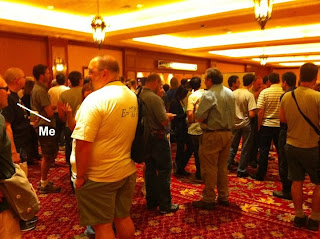 I struggled to determine if this TAM had a theme. Sometimes TAMs have themes like education or media. This one seemed to be, at times, big time skeptics lecturing the skeptic foot soldiers. Don't get me wrong. Phil Plait was 100% correct when he urged skeptics not to be dicks. If you've never been convinced of an argument via insults, why do you think it will work on a creationist or moon hoaxer? Massimo was entirely right that skeptics need to leave the job of data analysis to the experts. The role of the lay skeptic is to try to explain what the experts say when a woo-ist tries to take a claim directly to the public or media. There seemed to be a lot of reflecting on skepticism and god belief. Can you be both a skeptic and have faith in something that can't be tested? I have to take certain leaps of faith. How do I know my girlfriend (well, a hypothetical girlfriend) loves me? She could be just going through the motions. Anyway, I found the preaching on either side of the hardcore atheist/accomidationist debate kind of boring and took up too much valuable time when speakers like Dawkins or Adam Savage could be wowing us with science or woo-busting.

I did meet some listeners of my podcast. Harold from Nantucket blew me away with a lot of kind words. Daniel from Alberta bought me a beer and helped drag me off site for an afternoon. Michael from Toronto, a TAM volunteer, was another listener who I spent some time shooting the breeze with. He and I discussed maybe setting up our own winter time Skepticamp in Toronto. It could be fun. Stay tuned.

Trinity and Adrian were both listeners and podcast hosts in their own right. I did an interview for Trinity's show. I like when really, really attractive and talented people actually want to talk to me. 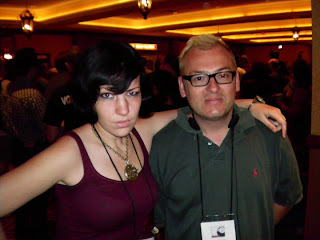 Desiree Schell of Skeptically Speaking noticed and complimented my shoes. I can die a happy, happy man.

Jacob Jax (hire him!) welcomed me from nearly day 1 I was in Vegas. Jax and I are huge Penn Radio fan boys and we bonded over that. Let me suggest if you visit Vegas, not just TAM, get yourself a juggler/magician local to pal around with. It's amazing the world they open up to you. Speaking of Penn Radio, meeting Big Frankie of Penn Radio fame was another high point. Frankie is as hilarious and friendly as he is towering. 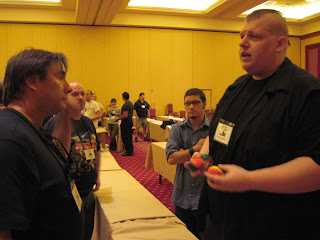 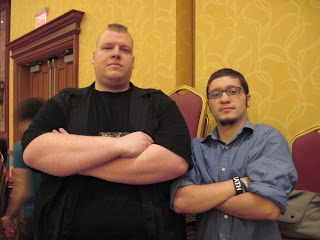 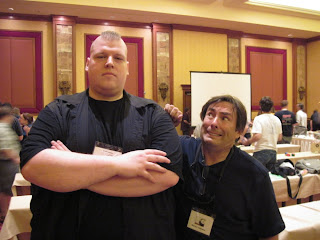 I was glad to finally meet Rich Orman from Dogma Free America. Rich has a very commanding presence, charisma to spare, speaks with sharp precision, and caps it off with an extremely welcoming and inclusive personality.

Oh yeah, and Blake Smith. He's a great one to match wits with. Try it some time. And where the hell were you, Brian Thompson?

(Next up, general Vegas stuff and schmoozing with Michael Goudeau, Mac King, and pie with Penn Jillette!)