My Saturday Morning, the Conspiracy Skeptic

Today's post is a bit different.   Instead of commenting on a podcast, blog post, or a revealing interview of a skeptical personality, I am going to review some of the activity surrounding Joyce Meyer Ministry's activities while in my town of Hershey, PA.  Meyer's podcast was recently discussed, and basically hammered to a pulp by the Chuck and Leighton at Irreligiosophy, and low and behold two weeks later Meyer shows up in my neck of the woods.
Also, Lady is off this weekend to folic with college friends at the beach.  While I like to imagine the time is spent in lingerie pillow fights, it is likely she and her LaSalle pals are "girlie gossiping" and discussing I don't know -shoes.  Needless to say, I have some time to kill this weekend.  Therefore, I have time to wonder offer to the Meyer's appearance.  Her final show of the three day series was Saturday at 10am.  I really did not want to sit through two or three hours of her teachings, but interestingly enough the website promoting the gig indicated that the "resource center" would open two hours pre-show.  It was free to attend the entire event, so check out the resource center and just get a feel Meyer's local followers.  It is only a 1.7 mile walk according to Google Maps from my front door to the Giant Center, so why not.

I grabbed my iPhone and ear buds and listening to a podcast I trekked over.  I arrived a little less than an hour before the show started.  A steady stream of people were arriving as I showed up.  Compared to a hockey game (The Giant center is the home of the AHL Calder Cup Campion Hershey Bears. Gwr-rr Bears!) the crowed was more ethnically diverse and clearly more women were in attendance than men.  I think it is also far to say the largest number of folks in attendance were what appeared to be suburban middle class women and a fairly large number college age-ish women to boot.
Walking into the crowd I was somewhat relieved that I did not stick out.  I was afraid everyone would be showing up with some manner of religious tee-shirts or similar attire that a 30 something white guy in polo shirt and jeans would not fit in.  I believe I melted right into the crowd.  I only spied one religious messaged tee-shirt which was worn by a portly 40 something guy that on front said "Believe What?" and the back said "Jesus is Lord." 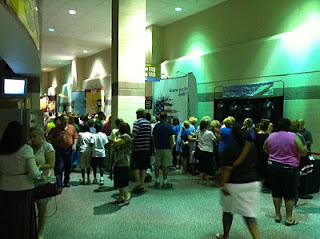 I roamed the outer corridor of the arena and finally ran into the resource center.  It was busy, but a lot less stalls than I expected.  A couple of stands sold Joyce Meyer tee-shirts. (No magnets for the fridge, which is what I collect.)  There was a stand pushing the "Love Life" women's convention in St. Louis, Missouri this September.  (Maybe D.J. Grothe can have a friend attend.)  A few stands were selling books, DVDs, lessons, and bible studies.  It was a crowded area.   I was pleasantly surprised that I did not see any material that pitched a 6,000 year old Earth or that Charles Darwin was a member of the Nazi party.

One stand was selling some interesting educational books with one book "Light and Glory" being a historical defense of the United States as a Christian Nation, and another book "Judicial Tyranny" which appeared to be a book how the U.S. Judiciary was crushing christianity.  There were a lot of other Joyce Meyer self help style books being sold with titles such as "Eat the cookies, buy the shoes."  I was able to flip through a single lesson book called "Filled with Spirit."  The type face was quite big and the book was more a of pamphlet.  One chapter was titled "Speaking in tongues is that for today?"  Nearly all the stands had a special sale usually something like buy two get one free of equal or lessor value.  I did hear what sounded like a teacher asking if she used one of the educational materials in the classroom (I think it was a pro-christian history of the United States DVD set) would she get in trouble with the courts.  The lady behind the counter assured her it was fine "just like something on the history channel." (Which if you think about some of the crap on the history channel is not saying much.)
Really, nothing overly shocked or upset me at this point.  I am sure I'd disagree with 95% of the materials for sale, but nothing was stunningly crazy. With about thirty minutes to show time, I entered the seating area and about 2/3 of the seats were filled and more folks were coming.  I then wondered over to bar club area, which during a hockey game you can enjoy a lovely draft Bud Light and watch the game. Only the bar was not open, and I noted one gentleman about my age walk in to be disappointed finding the bar closed.  (It was still before 11am.  I can't imagine what he expected.)  Two over head screens above the stage played music and scenes of Meyers on her talk show to keep the crowd entertained.  Some staff members kept the crowd charged up by having the arena do the wave.  Then like clockwork at 10 minutes to go Joyce's warm up guy came out.
He was really quite a charismatic fellow himself.  A younger early 30ish hipster type with a trimmed beard.  He thanked the crowd, and told them that sadly this was the last show of the weekend, but Hershey had already been booked for next year. This announcement generated real cheers and applause of joy from the crowd.  He then pitched the "Love Life" women's convention, and told everyone about the new website for the ministeries was about to launch.  He boasted that the site would have full access to financial accounting of the ministeries.  He then urged everyone to buy teachings at the resource center or online.  Then a promotional video was shown for another convention of some sort.  The video was a spoof of the battle scene in Brave Heart complete with bad Scottish accents to pitch this other convention and to remind the viewers that if you bought two teachings you'd get the third FREE!
Then the hipster pitched the opening act Israel Houghton's tee-shirts, which if you bought one you would get two free digital downloads of two of his albums or records or whatever you call an LP these days. 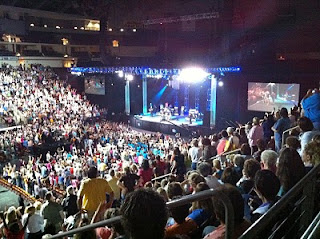 Then after a couple of free books were handed out to some members of the crow, free tee-shirts were shot into the crowd with one of those two person tee-shirt slings you see at baseball and hockey games.  The crowd went wild.  I thought this was all sort of odd behavior for a what amounted to a religious service.  I was not brought up in strong household of faith, but I did go to Mass a fair amount as a kid with my Mom's side of the family.   I do not remember one time when right before Mass kicked off the Priest had the alter boys shoot tee-shirts or anything else into the gathering.

Then the lights dipped down and Israel ran out and kicked into high gear with his band playing some pretty good rollicking gospel music.  A crowd of people flocked to the stage as if "The Foo Fighters" were kicking off their set and if they sang "Love the Lord" instead of "Monkey Wrench."
Overall it was a lot more tame or at less odd than I was expecting, but then again I am not sure what I was expecting.  Everyone seemed quite nice for the most part.  There were not a lot of little kids or older people that I noticed.  Everyone generally appeared to be enjoying themselves, and I can see the appeal of the entire enterprise.  There was a good sense of community.
I have to wonder if Jesus did jump down into the corridors of the Giant Center if he would not look at the merchandising tables and ponder turning a few over.  I do not think Joyce has to worry about this since I doubt this could ever occur.  Maybe I need to wait until a faith healer or a version of "Mind, Body, Spirit" shows up to our modest town to witness something truly interesting. 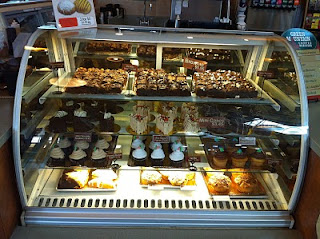 I then slipped out of the arena and headed over to Chocolate World for a late morning breakfast, and stare at all the delicious stuff I'd loved to nom.  (Trystan of RI Podcast would hate it.  He has shared on RI that he dislikes amusement parks.  CW is right next to a dreaded such park with roller coasters, and arcades and whirling rides.  He'd likely have a breakdown.) 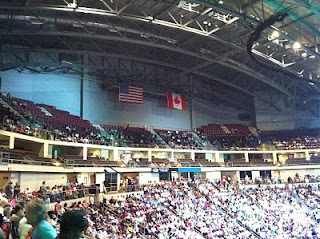 In more typical SkepReview news Karl has release another Conspiracy Skeptic Podcast from up North.  Oops.  I forgot.  In honor of Karl I took a picture of the Canada flag in the arena above.  Anyway this month's episode featured an interview with Neil Croll on the ZOG conspiracy.  ZOG stands for the zionist occupation government.  The idea is that after World War II behind the scenes the jews took over the U.S. government and by extension the government of Canada and the United Kingdom among others.  Once they took control of these countries it was easy for Israel to be formed, and secret shananigans and plans for a future race war to follow.
This is one of those conspiracies that I do not think of much, but once I started listening I thought 'oh yeah those guys.'  However, even more interesting than the ZOG conspiracy was the story of Croll.  Croll is now a skeptic, but during his late teen and early twenties he was a member of a Nazi skin head youth group.  His story of how and especially why he moved from skinhead to suburban middle class skeptic was really quite fascinating and engaging.  Naturally, he became a self described skeptic after listening to the Skeptics' Guide to the Universe.  (Really, how many out there today were not made self aware of their skepticism by our friends in New England.)  He also discussed the role that chinese food had in revealing why being a skinhead was stupid and inane.
Croll is my age, and he discussed how the skinheads gather information before the internet, which meant a lot of poorly photocopied Nazi literature.  I always find it jarring just how much life has changed due to the net.  Also discussed was that certain skinhead literature was highly prized in Canada since it was illegal to be brought into Canada from the free speech gone made United States.  I found this fascinating too.  I cannot imagine the government not allowing literature even if it is from bone headed racist hate filled skinheads.  It just goes to show Canada and the United States have differences greater than the pronunciation of "about."
Once again this episode revealed why Karl is so good at what he does.  This was not really an interview in the strict sense of a bunch of talking point being ticked off one at a time, but a conversation with someone who has had a interesting life.  The actual ZOG conspiracy did not get much time, but it was not missed because the conversation itself was so interesting.
I would also like to note this week three years ago Perry DeAngelis a founding member of the Skeptics' Guide to the Universe died.  The show while still grand has never been the same, and he is missed.  Monkeys rule, birds drool.
Posted by Howard "Nigel St. Whitehall" at 5:20 PM

Labels: I get off my duff