Righteous Indignation, The Skeptics' Guide to the Universe, Token Skeptic, and odds and ends

As the reader of this blog is likely aware, I am quite the fan of Righteous Indignation with its band of Indignates out of Great Britain, streaming skeptical stories in a entertaining, but ultimately thoughtful manner.  If you stumbled upon my appearance on Karl Mamer's Conspiracy Skeptic Podcast, I have been so bold to proclaim in public that I enjoy R.I. more than the quite well done and exceedingly popular Skeptics' Guide to the Universe.  This is not to say the SGU is crap.  It is far, far from it.  I enjoy it immensely and would recommend it at the drop of a hat to anyone.

This week's double episode reveals to me why the Indignates have a bit more of a cutting edge show.  As I have noted before, the SGU is the Tonight Show in 1985, while RI is the Late Show during the same year. (Ed. note: Do such comparisons work on an international level? Author: They can Wikipedia it.) On episode 67, the Indignates covered how some misunderstandings arise between skeptics and conspiracy theorists.  The conspiracy community (is there one?) cannot fathom why skeptics do not question "the official" story, and just go along with the lies of mass belief.  The Indignates discussed how skeptics as a group do not go along with anything but look at the evidence, and in most alleged conspiracies, the evidence is wanting.  They used the alleged conspiracy of the cover up of the sinking of the HMS Invincible during the Falklands war as an example which was discussed on the Conspiracy Skeptic Podcast.*

The Indignates discussed the rise of the occult in Russia and Eastern Europe, but the guest on the show was 15 year old Rhys Morgan, who has come to fame in skeptism-dom (like Christendom, only not) by his efforts in combating alternative medicine misinformation on Crohn's Disease web forums.  He put out a YouTube video about his being kicked off, and it was picked up skeptics round the globe including an interview on the SGU.
As I noted about Morgan on an SGU post and this time as well, Morgan is amazingly well spoken, thoughtful, and comfortable in defending a rational argument and discussing such matters with aplomb.  Morgan in particular was quite able at tearing apart the snake oil of Miracle Mineral Solution, which is a form of industrial bleach, to treat Crohn's disease sufferers.  Once again, a tip of the hat to Morgan, and a well done interview by the Indignates.
But wait!  There is more.  Not only did the Indignates interview Morgan, but on the following episode they interviewed Jim Humble, proprietor of the Miracle Mineral Solution.  Perhaps the Rogues on the SGU did not think to interview Humble, perhaps Humble was busy or whatnot, but I was mighty impressed by the stupidly logical one, two punch of skeptical activist and woo peddler.
All I have to say about the interview with Humble is that if there is ever a skeptical class taught within the boundaries of skeptism-dom, this ought to be within the curriculum.  Humble "discovered" his elixir while prospecting for gold in South America, then found it had been in use in the states for years to clean and sanitize hospital floors and such for years.  Yes, MMS is a form of industrial bleach.  This alone does not make it bad.  I suppose a chemical cleaner could do some good medically, but this stuff does not just kill germs.  No.  It blasts a hole in them.  (All I kept thinking of was a German U-boat being blasted away by depth charges.  I digress.)  He has started up a church to support his treatment program, as well as some sort of course to teach how to use his MMS to treat the cold, flu, infections, burns and HIV.  Yes, he treats HIV and people with AIDS with his quack juice.  His evidence is by admission completely anecdotal on "success" stories.  No time or money for medical trials and double blind studies.
It was maddening and quite depressing.  The strange thing is that if I read the above, I would think this guy has got to be in on the con.  The thing is I think he is genuine in his belief that his bleach concoction works.  He could be a supreme actor in this regard.  I won't discount it, but I think he actually thinks this stuff and his church are all okay and without malice aforethought.
On the SGU, the Rogues interviewed skepchick Buggirl, who keeps anonymous due to state laws outlawing state workers from expressing opinions in public.  I did not know North Korea had joined the Union.  Actually, while the laws governing employees of the Commonwealth of Pennsylvania are not so brutal, it is wise to maintain a distinct split between my professional persona and my skeptical activism.  I get where Buggirl is coming from on this issue.
Anyhow, Buggirl was on to discuss the bedbug epidemic that is sweeping the U.S.  It is frightening.  First, it is tougher than ever to kill the buggers since they are gaining resistance to the chemicals that killed them off in the first place.  Second, it is rather easy to bring them back home with you after a visit to a hotel that is infested.  Third, it is not that easy to be rid of them once they are in your house.  However, they do not carry pathogens, and bring renewed vigor to the old saying "don't let the bed bugs bite."  It was actually a rather interesting interview, and a must for the traveler or one who considers using cast off furniture.
It has been awhile since I have covered Kylie Sturgess on Token Skeptic.  On Episode thirty-six, Sturgess interviewed Jayson Cooke of the Griffith University Skeptics on skeptical activism.  In particular, the interview focused on Cooke's activism to bring to light that the University of Southern Queensland was hosting a University-sponsored talk by the Creationist Ministries on Creationism and why it is all good and science-y and the actual science is wrong.  First, Cooke is a fun interviewee.  I enjoyed hearing him speak a great deal.  I don't want to be a spoiler on the show, but basically he spam emailed the University to bring to light what they were sponsoring.  At first he did not think it had any positive effect, but quickly he received an outpouring of support, and the event shifted off campus.
This was activism in the real world, and it worked.  It was spam.  I hate spam.  (The kind in the can that is beloved in Hawaii, I have a soft spot for at times.  The Email type I hate.)  Sturgess as always was great.
I have also finally listened to "Skeptics with a K" and "InKredulous" both of the Merseyside Skeptics.  I thought they were both highly entertaining and thought provoking.  InKredulous is definitely not for the kiddies to enjoy until they are aged 32, and Skeptics with a K has a bit more bite than R.I. 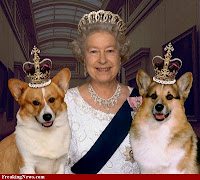 If I start following them along with all the other podcasts, I may have to ignore my wife even more than usual. (Author: the ed added this bit.)  No, kidding.  But seriously, I will also have such a high percentage of the Mother Country and Commonwealth-based podcasts, I might change my logo to a picture of Elizabeth II.  Knowing me, from time to time I will likely cover both podcasts.  They were good.
In other news:  A skeptic of some note has graciously volunteered to blog from TAM London 2010 and post on this very blog.  Stay tuned for a uptick in quality during TAM.
*It was a smashing good example.  I would have to think so as the episode of CS in question had me on as a guest.
Posted by Howard "Nigel St. Whitehall" at 8:34 PM