What would happen if skepticism actually won one and banished from popular culture one area woo?  This week on Righteous Indignation this was very issue raised by Trystan and the area of "woo" is crop circles, which as loyal listeners of the podcast will know is Trystan's area of expertise. 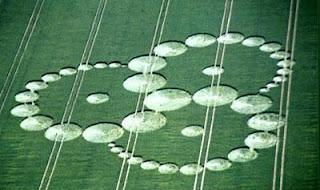 Trytan noted that the number and quality of crop circles in the U.K. are down, and some of the circles being produced today are obviously fakes since a few depict various naughty bits of the reproductive anatomy.  Part of the reason might be that some of the crop circle makers even after Doug and Dave confessed to being the arthors of a large number of them had always maintained a bit of mystery as to which ones they made, and which once others made.  Trystan seemed to be arguing this keep the air of mystery and folklore alive and vibrant.  However, recently crop circle makers have taken to having internet vodcasts where they confess to their latest creations, which is possibly contributing to deflating the crop circle balloon.  While an area of irrational belief could be disappearing, it is distressing to see a vibrant and interesting part of the popular culture disappear along with it.

Trystan seemed to lament the possible impending loss of the crop circle phenomenon along with the lore and romance with the increasing amount of public authorship of the circles.  To me it seemed as if someone was taking away a big chunk of joy out of his life, it was quite a tender segment on the episode.    As a sucker for nostalgia myself, I can empathize.


First, Hayley opined that while the number of crop circles might be less the true believers that the circles are created by god, aliens, time travelers, the spirits of the dead, and basically anything but some people with a measuring tape, some rope and wooden planks will never completely go away.  I agree.  These things tend to stick around with waxing and waning popularity.  Houdini did a splendid job of showing medium after medium as a fake, but spiritualist are still bilking way too many people of their pay after a hundred years.

Second, sometimes victory or at least winning can kinda suck, and leave one a bit adrift.  General George Patton had no idea what to do with himself after leading the U.S. Third Army to victory over the Nazi menace.  Some report that instead of enjoying the fruits and accolades of victory and a job well done, it is possible he wanted to dash off and fight the Soviet menace. Instead, he was paralyzed in a car accident and died shortly thereafter.  I am not saying if crop circles disappear from popular consciousness Trystan ought to get himself run over by a Vauxhall, (why did I bring up General Patton?) but to take a sorta kinda win in stride and move onto other topics of interest.

I doubt crop circles will ever completely fade away.  New areas of woo never seem to stop cease to be invented, and old woo is never completely replaced by the new woo.   The total amount of woo just seems to grow.  If suddenly the mass belief that J.F.K. was assassinated as part of a vast conspiracy would evaporate, I would be elated for a brief bit. I think.  However, a small hole in my life would exists.  I would miss arguing with relatives about at various gatherings and during small talk at office meetings.  (It is weird how the death of JFK just pops up from time to time, and then I always open my yap and make a big ta-doo about those claiming President Johnson, or the Mofia, or the Cubans murdered President Kennedy.)  I guess I will always have chiropractic to debunk to the eye rolls of whomever I am around.  Chiropractic a warm blanket of crap-based-medicine to keep my ire warm at night.

With the above it was a good episode with the Irishman, Hayley, and Trystan discussing the activities at Q.E.D.  Apparently there was a large Irish contingent to the conference, and it seemed to the Indignates as if everyone had a good time at the conference.  Also, it sounded as if it was impossible to do everything worthwhile, and some good bits had to be sacrificed to enjoy other bits.  This to me is a sign of a good conference.  I wished Manchester was about two thousand miles closer.

If you want to get a glimpse into why I rather dislike my chosen profession of the law then please listen to Karen Stollznow interview Michael Cicchini author of "But They Didn't Read Me My Rights: Myths, Oddities, and Lies about our Legal System" on Point of Inquiry.  Mr. Cicchini does a quick discussion of how irrational the legal system is in the United States in regard to just how much law is out there, how enforcement of the law can actually be unjust, and how the quality of evidence does not always carry the day.  It was quite a negative self affirming listen.

On a random note:  I have recently read "Mere Christianity" by C.S. Lewis which is considered by many of the faithful to be a seminal work in apologetics.  The book is not very long, and is a surprisingly quick read. I must admit that I am a bit disappointed.  It is not that I expected to blown off my feet, and suddenly run down to Saint Joan of Arc to repent my errant ways to the first priest I could find, but I was expecting something a bit tighter.  If one was already a member of the faithful I can see how Lewis' book would give comfort and fortify one's pre-held beliefs.  However, I do not however see how this work would convince many on the fence.  Lewis loves to argue from analogy.  The analogies have holes in them, and after the tenth or so analogy they tend to become a bit oldhat.  Lewis argues from a first principle that since we have a sense of right or wrong there must be a god, or same overarching law giver.  He describes why the Christian faith is proper and better than other faiths by laying down the basic framework of Christianity in Lewis' view.   The case why Christianity is the one true faith and the others are not correct is never made, or at least not clearly.  Also, Lewis keeps referring to Muslims as Mohammedans, which just seems so quaint today.
Posted by Howard "Nigel St. Whitehall" at 8:33 PM