An Elephant in the house. 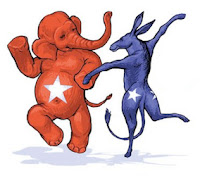 The most stunning and welcome thing I have read today came from The Friendly Atheist Blog.  The new Executive Director of the Secular Coalition for America is a Republican.  (If someone is reading this to you that is Republican with a capital "R" as in Abraham Lincoln, Dwight D. Eisenhower, John McCain, and both President Bushs.)  In fact, Edwina Rogers, the new Director has worked in both Presidents Bush's administrations.  I think Rogers posting as Director is a welcome and possibly tactically wise decision, and it might be evidence that the Grand Old Party is not the monolithe that many, including the many within GOP, believe or wish it be.

Hemant Mehta posting a brief interview with Rogers.  One of the things Rogers stated noted I found interesting:

I do think that for the vast majority of conservatives and Republicans, they are true believers of secularism — the majority of Republicans believe in the separation of church and state. Many of them are simply laissez faire about the issues, which gives us an opening to recruit them to the movement.


While I do think the above might be a bit optimistic of a statement, I do not think it is meritless.  Where I would quibble is that while I can agree that many Republicans might have a laissez faire take on the issues, conservatives probably do not. If you are a Republican but do not fall within the conservative wing one is probably going to be labeled a R.I.N.O. (Republican In Name Only, jerks).   Conservatives and Republicans are not (yet) interchangeable.  The word "vast" to describe the non-conservative part of the GOP in my estimation would more accurately be deemed a significant portion.  The conservative part of the party has all the sway at this time, so it is long row to hoe even if Rogers can connect with with a portion of the GOP.

Regardless of political background I hope she is effective in her lobbying skills.