A few recent items of note


The latest Skeptic Zone ep. 196 starts with a very nice interview of James Randi by Maynard, which is always pleasant.  The episode ends with an interview of Isil Arican and Cuneyt Ozdas, who have a skeptical blog for Turkish speakers at Yalansavar.  Arican and Ozdas discuss some of the challenges for Turkish skeptics, rationalist, and atheists.  (I know it is stupid of me, but I am a bit surprised that not all skeptics speak English.  I have no idea why this is the case. ) 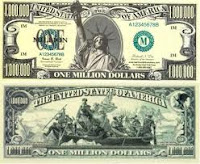 The above was entertaining and informative, but the the middle bit concerning the preliminary test performed at TAM 10 for the million dollar challenge was quite interesting.  Through a series of brief interviews of Richard Saunders, Jamy Ian Swiss, and Spencer Marks the listener learns how the latest challenge came to fruition from the initial contact by the challenger to Saunders through the working of the protocol with Saunders, Marks, and Swiss along with the challenger to the test itself.  It was not an expose style segment, but just a bit of a fly on the wall type of segment.

Point of Inquiry this week featured a Chris Mooney interview of Kerry Emanuel.  Emanuel is a climate scientist, and he is also a conservative and until recently was a Republican, but now an independent.  He is clearly in the science camp and agrees that anthropogenic global warming and even in (gasp!) evolution.   The interview focused mostly on what conservatives should be arguing in regard to climate change instead of arguing against the solid scientific consensus.   Emanuel opines that conservatives should be discussing how to deal with the actual situation otherwise they risk not having a say in policy. He briefly discusses the arguments for the use of carbon sequestration of coal plant exhausts, increased use of nuclear power, and ending subsidies for fossil fuels and related industries.  He makes a cogent argument how these postions are solid conservative positions, which the right is missing out in making.

I found it a refreshing interview.  I enjoy Mooney's interviews a great deal, but they sometimes get a bit tedious with the same beat left of center right bashing.  The right has a lot of things that make me cringe, but it is nice to hear another viewpoint from time to time.


Finally, Dr. Stuart Robbins has recently produced a brief and effective You Tube video showing in a very convincing manner that photographs that show an alleged ziggurat on the far side of the moon actually do not show a ziggurat on the moon.  (This topic was recently raised on Coast to Coast AM) Rather, it is just hill in the photos and nothing more.  The video is less than five minutes in length, and an impressive first video outing for the good doctor.

Dr. Robbins has followed up his video with a thoughtful blog post on "Do Skeptics hate the people they debunk."  This blog post was authored in response to pro-moon ziggurat proponents claiming that Robins and skeptics are 'haters.'  It's a nice piece.  I recommend it as he explains that he does not hate our cultural competitors, but does find the claims that are made interesting.